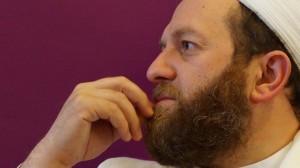 "Allahu Latifun bi ’ibadihi" Shura/19. Look at this verse! ‘Allah is kind to His slaves’.

When do you feel that lutf (kindness)? When you open your heart and you go to Allah Subhanahu wa Ta’ala. You see the Lutf (Kindness) of Allah in themost difficult of situations. Why? If you are among His ibaad (generally believed to mean slaves)! What does that mean? Aren’t we all His ibaad? Aren’t we all His slaves? Yes, but there is a difference between ‘abeed’ (slaves) and ‘ibaad’ (worshipers). Everyone is ‘abeed’ (slaves) because ‘abeed’ comes from ‘abd’ and ‘abd’ comes from slave and everyone is a slave to Him. But also ‘ibaad’ (worshipers) comes from worshiping (uboodiyya), the worshippers of Allah Subhanahu wa Ta’ala.

‘Ibad’ are [both] slaves AND worshipers of Allah Subhanahu wa Ta’ala and the maqam (station) of uboodiyya (true worship) is the highest maqam. Therefore, in your salaat (prayer), you attribute the Prophet (salla Allah alayhi wa alihi wa sallam) with abboudeya (worship) when you say ‘ashuda anna Muhamadan Abduhu’ (I bear witness is His slave/worshipper) and then ‘Rusoloho’ (and Messenger). You make prioritization. Your prioritizing ‘abduhu’ (worshiper/slave) and then you say ‘Rasooloho’. This means that the Maqam (rank) of Sayyidina Rasoolillaah, sallallahu Ta'ala alayhi wa aalihi wa sallam, is the Tahqiq (realization/perfection/exemplary) of the meaning of Uboodiyya (worship). Therefore when he-sallallahu Ta'ala alayhi wa aalihi wa sallam- used to stay up the nights praying and our mother Sayyida Aisha-radiya'Allahu anha- used to ask him: why is he doing this to himself. His response would be: Should I be Abdan Shakuran (grateful slave/worshiper of Him). He Subhanahu wa Ta'ala is very very Kind onto those who are close to Him. Try to be a thankful worshiper and a true worshiper of Him, even for a day, and see."